You may also be interested in a general overview of our research, more specific descriptions of other currently-active research, the people that made this work possible, and our publications.

The insulin receptor signaling pathway (IRSP) is arguably one of the most important growth and proliferation signaling pathways responsible for regulating animal cells (Haeusler et al., 2018). It is most recognizable as an insulin-responsive pathway that triggers the exocytosis of glucose transporter 4 (GLUT4) to cell membranes — predominantly in striated muscle and adipose tissue — facilitating glucose uptake and lowering blood glucose levels as a result. However, beyond glucose uptake and the broad regulation of blood glucose levels, the IRSP is broadly implicated in promoting the anabolism and modulating the catabolism of every major biomolecular class — polysaccharides, triacylglycerols, proteins, and nucleic acids. It is also responsible for promoting cellular survival, growth and proliferation, while inhibiting apoptosis and autophagy. Its members and metabolic/physiological outcomes are depicted in the Cell Signaling Technology pathway diagram below: 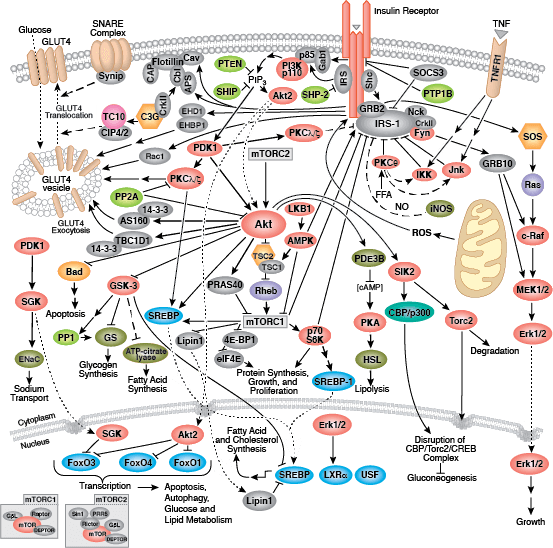 Due to the complexity of the IRSP, there is quite evident potential for numerous molecular pathologies to arise at various hierarchical levels of the pathway; the higher the signaling level at which a molecular lesion develops, the greater the number of metabolic functions and outcomes that may potentially be affected (Boucher et al., 2014). The most common dysfunction stemming from IRSP lesions is non-insulin-dependent diabetes mellitus — more commonly and simply known as type 2 diabetes. While there is somewhat of a stigma surrounding type 2 diabetes — in that it is typically associated with unhealthy lifestyle, poor diet, and insufficient exercise — growing evidence suggests that previous preconceptions may be at least somewhat oversimplified; a greater population of non-obese type 2 diabetics are being recognized, as is the notion that insulin resistance is strictly a cause of obesity versus an effect of obesity (Corkey, 2012; Han and Boyko, 2018; Berumen et al., 2019; Malone and Hansen, 2019; Olaogun et al., 2020). In type 2 diabetic individuals who maintain an otherwise-healthy lifestyle — and/or in individuals where dietary and lifestyle changes are ineffective and/or impossible (e.g. due to mobility issues, etc.) — pharmacological intervention remains important despite societal aversion to drugs; this is only further underscored by projections issued from the International Diabetes Federation that 700 million adults will be living with diabetes worldwide in 2045.

While there are currently antidiabetic drugs in common use, they are not without their issues. The globally-recognized “gold standard” drug, metformin a.k.a. Glucophage, is postulated to lower blood glucose by activating exercise/catabolic signaling pathways in cells — namely the 5′ adenosine monophosphate-activated protein kinase (AMPK) pathway (Hawley et al., 2002). While metformin is widely-lauded as not only an efficacious antidiabetic — but also a “wonderdrug” with astonishing prospective uses ranging to anti-cancer potential — it entails some risks, particularly in our increasingly-aging population. These may include neurodegeneration, muscular atrophy, hypoglycemia, and gastrointestinal distress — as is summarized in our 2021 PharmaNutrition review (Knezevic et al., 2021). In said review, we propose an attractive nutraceutical alternative to metformin: catechol-containing compounds. Catechol — the 1,2-dihydroxybenzene chemical structure seen below — is present as a structural moiety in a variety of natural products associated with potential reversal of insulin resistance or sensitization of the IRSP — such as capsaicins (the pungent active ingredient in spicy foods; Panchal et al., 2018), curcuminoids (such as curcumin, the active ingredient in turmeric; Hodaei et al., 2019), and catechins (a prominent ingredient in teas; Yan et al., 2012). 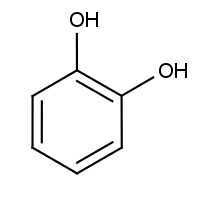 Our aims, broadly speaking, are to characterize the molecular mechanisms by which catechols sensitize cellular transduction of the IRSP and thereby reverse insulin resistance. To that end, we are currently engaged in the projects below.